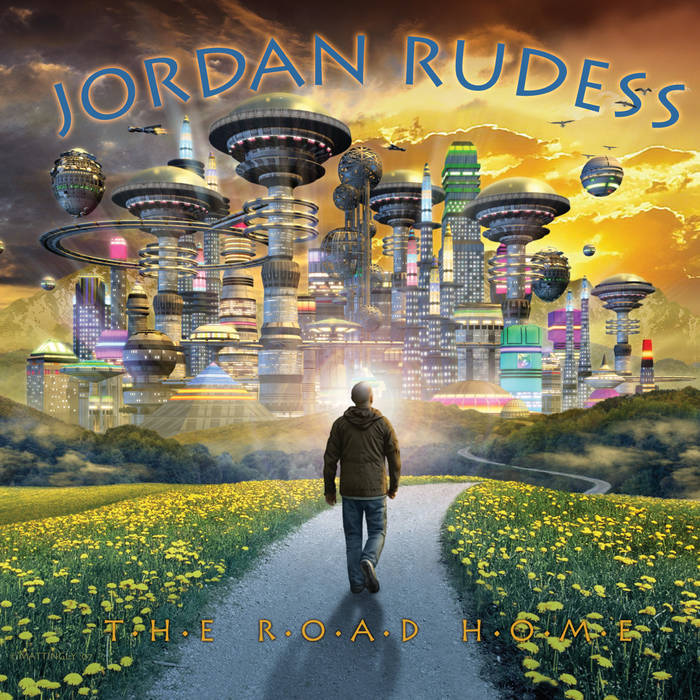 THE ROAD HOME:
JORDAN RUDESS GETS BACK TO HIS ROOTS

Earmarked for a brilliant career as a classical pianist, Rudess was seduced by prog rock’s siren song and found his musical identity. “I remember hearing Gentle Giant’s Free Hand for the first time,” says an über-exuberant Rudess. “I totally, absolutely got into the song ‘Just the Same’. It is kind of like an anthem for me -- a song of freedom and personal rebellion.”

With his new solo record, The Road Home, the synth/piano giant dives headlong into a canon of music that inspired joyous upheaval and unprecedented creative discovery in his life. “I felt recording songs that were meaningful to me then – and now -- would be fun and challenging at the same time,” Rudess says. “[Prog] changed my life, for sure, and took me off the purely classical path and firmly committed me to this other road of discovery.”

Where would the prog world be without Rudess? Perhaps this is a question left unanswered. (Let’s just be thankful we have him.) Rudess’ willingness to stretch the boundaries of technique and explore sonic textures in a variety of expansive compositions has made the former classical pianist the heir apparent to an elite prog-rock keyboard monarchy endowed with such superior stock as Keith Emerson, Rick Wakeman, Patrick Moraz, and Tony Banks.

“You’ve always had Keith Emerson and others, who people have looked up to as far as what is possible [with the keyboard],” Rudess says, “and maybe, to an extent, people are now looking to me as well.”

As the kicker, a seamless piano medley fuses bits of the Jon Anderson vocal showpiece “Soon”, Crimson’s gentle, supernatural “I Talk to the Wind” (with vocals by Rudess), Yes’ “And You And I”, and Genesis’ sprawling, absurd “Supper’s Ready.”

Don’t be fooled. The Road Home is not a ham-handedly mashed together tribute record: it’s a genuine product of personal inspiration. “I wanted to play the right pieces and play the parts that I felt were really important to the composition,” says Rudess, who penned the original “A Piece of the π” for The Road Home. “I also added my own sections that aren’t there at all [in the original songs]. So there is a lot of originality even within these new arrangements.”

Rudess stamped these tunes with his signature synth-layering compositional approach, and tapped his considerable bank of keyboards (and sound libraries) for a variety of tones. “In my studio, it is almost as if I have every paint color that is available – and I am not afraid to use them,” says Rudess. “The core of the instruments I use are Korg OASYS, the Roland V-Synth, the Roland Fantom, the Fantom XR rack module, and Haken Audio’s Continuum Fingerboard.”

The Continuum, a polyphonic and pressure-sensitive device, behaves much like a fretless stringed instrument. “The Continuum is a controller -- it doesn’t make any sound by itself but I run it through a Roland V Synth XT,” says Rudess, who ironically had envisioned a market for such an instrument before ever hearing of the device. “You have the capability of playing ten notes at a time, and you can really slide from one note to the other very easily. You can have it zone into the pitch.”

As Continuum creator Lippold Haken states, it is not an easy instrument to master. “The Continuum Fingerboard is like a ‘fretless piano’ in that it does not have individual keys,” Haken says. “Instead, it has a continuous playing surface. You can configure the Continuum to ‘round off’ your finger position when you place your finger on the surface. … After playing the Continuum for a while, Jordan asked for an enhancement to this rounding feature: he needed notes in tune not only when he first put down his finger, but also after he slid them across to surface for new pitches. I developed a method for him that will correct the finger position [pitch dissonance] and it has become very important for the Continuum. It has allowed Jordan to play much more complicated music.”

While Rudess certainly immerses himself in technology, it was a recent solo piano tour that rekindled his love for the prog classics. “I had opened for Blackfield [Steven Wilson and Aviv Geffen] on an East Coast run [in 2005] and performed just a piano set,” says Rudess, who achieved acoustic piano sounds via Synthogy Ivory computer software. “I had been practicing some of the prog songs already in preparation for the tour. Piano goes back to my roots.”

Indeed. The Road Home echoes with the sounds of rock’s golden era as much as it measures the musical distance Rudess has traveled. “My first exposure to the piano was really in my second-grade classroom when I started to tinker with it and began to accompany the kids at school when they used to sing songs,” says Rudess. “My second-grade teacher would always send me home with little notes to my mother: ‘Oh, your child is playing the piano so nicely in the class, and it is a pleasure to have him playing for us.’ My mother would say, ‘What are you talking about? We don’t even have a piano.’ That convinced my mother that she should buy a piano.’”

Rudess began taking lessons and was soon accepted into Juilliard School’s Pre-College division when he was just nine years old. (Rudess eventually entered the Juilliard School’s college program on scholarship, despite not sitting for the SAT exam.) “I had a very serious classical music upbringing,” Rudess says. “I practiced every day from two to five hours a day.”

Upon hearing Keith Emerson and Rick Wakeman (The Six Wives of Henry VIII) all hell broke loose. Classical music seemed an anathema. “My strongest memory, of all the memories that really changed my life, was listening to Tarkus by ELP,” Rudess says. “That was just an awakening for me, because never before had I heard the keyboard possess such strength and power. [I was thinking] ‘The keyboard can be an instrument that really rocks.’”

Rudess began to tinker with a borrowed muSonics Sonic V synth – a predecessor to the Minimoog – which further expanded the pianist’s perception of musical possibilities.

“I didn’t have any experience with the synthesizer at all,” says Rudess. “I think that was the first synthesizer I had touched. I remember bringing it into my room, sitting down on my bed and connecting some headphones to it and listening to it. I was turning knobs and thinking, ‘This is amazing.’”

Suddenly, a new world had revealed itself, one that would forever change his career path. “Around that time I had heard Patrick Moraz using the pitchwheel on the recordings he did with the band Refugee,” Rudess says. “There’s a solo in a Refugee song called “Someday”, which I always point to as being really key for me. I said, ‘Whatever instrument this is, I gotta have it.’ The Minimoog wound up being my first synthesizer.”

“My sound became the sound of the instrument being bent, twisted, and shaped,” Rudess says. “I didn’t care much about tonality in those days. I kept this active life of music that was very ‘out.’”

Much to the disappointment and dismay of his parents and teachers, Rudess willfully bailed on the classical music track to pursue a progressive rock. By his late teens, the Great Neck native had quit Juilliard altogether and drifted south to Maryland. “My parents were freaked out and remained freaked out for some years,” Rudess says. “For me, it was an important … teenage rebellion phase. It was [about] getting away from New York and classical music.”

While in the “Old Line State”, Rudess searched for love and a new musical direction. Neither amounted to much. “I had gotten myself into a band [Apricot Brandy] that played commercial music,” Rudess says. “We used to play these high school proms and at one point we would throw in a couple of originals. They were totally whacked-out ELP-meets-Gentle Giant songs. The kids would hear this and just stop dancing. They didn’t know what to think, and I remember these blank stares in the audience.”

Eventually, Rudess found his way back to New York, where he joined Speedway Blvd (which had inked a deal with Epic Records). When Speedway failed to capture the public’s imagination, Rudess slid under the radar until taking a position as a product specialist for the musical gear company Korg. Soon after, he recorded the independent release Arrival and appeared on Vinnie Moore’s Time Odyssey.

After touring with Jan Hammer (Miami Vice, Mahavishnu Orchestra, The Hammer Group) and the late, legendary Miles Davis skinsbeater Tony Williams, Rudess went on hiatus from the 9-to-5 work world to concentrate on his songwriting. The time off bore fruit: it produced his ear-catching first solo rock CD, “Listen” (Invincible records). Rudess gained recognition for his keyboard wizardry when he was voted Keyboard magazine’s “Best New Talent” in its 1994 readers poll. He quickly came to the attention of prog metal band Dream Theater, which had been looking for a replacement for original keyboardist Kevin Moore.

“One day I had gotten a call from the Dream Theater management about the possibility of auditioning for their group,” Rudess says, who admits he knew little about the band before he was contacted. “What struck me was the band’s virtuosity, which I hadn’t really heard mixed with progressive rock.”

Rudess aced the audition, but as fate would have it, at the same instant, he had gotten a call from the Dixie Dregs to join their band. “The same week I learned all the Dream Theater material, I had to learn all of the Dregs stuff,” Rudess says.

It was a tough decision: join the established Dregs or become a member of up-and-comers Dream Theater. Rudess declined Dream Theater’s invite (though he did stay on until they found a suitable replacement) and accompanied the Dregs on sporadic dates for their “Full Circle” tour. (It was this Dregs tour that inspired the critically acclaimed “power duo” Rudess Morgenstein Project.)

“To this day, my job [in Dream Theater] is to push the boundaries a little bit and to challenge the listener and convince [the band] to go in directions that they normally wouldn’t,” says Rudess, who released Systematic Chaos, his eighth record as a member of Dream Theater.

It seems throughout his career, Rudess has been hard-wired for musical exploration. “I’ve worked with many different musicians, from the famous to the obscure, over the last 35 years or so, as a composer, performer, teacher, sound man, programmer, sound designer, tech support specialist, manual writer, and even music calligrapher,” says experimental music partner and “technical guru” Richard Lainhart. “Jordan’s the only one of all those that I would consider a genuine musical genius. He’s obviously a great keyboard virtuoso. But what impresses me most about his musical ability is his improvisational skills. … Jordan has seemed to me to be nothing so much as a fountain of music -- a constant stream of invention, always different but always appropriate and technically impeccable.”

Rudess’ progressive-leaning keyboard compositions and approach may not have been what his mother Rita had envisioned for her son (“She always says, ‘But you used to play Chopin so beautifully’,” Jordan intimates), but Rudess knows he made the correct career choice. And with The Road Home, it appears he’s right where he belongs.

I talk to the wind:
Vocals - Jordan Rudess and Bert Baldwin

Bandcamp Daily  your guide to the world of Bandcamp

Featured sounds from Fly Lo and Ahmed Idris, plus Mother Nature hops on to drop off new project